About 10 Follenites are now (October 21-28) on the Living Legacy Civil Rights Pilgrimage though the South. 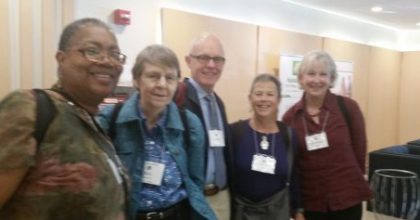 Greetings from Birmingham. We arrived Saturday to a welcome orientation and dinner and conversation. Here is a subgroup (left) on Sunday morning as we prepared to go to the Bethel Baptist Church for a two-hour service that included song, dance and a sermon. The church was instrumental in starting the Civil Rights movement in the 1950s.

We are learning so much about Birmingham and the reasons it could be a strong voice in the civil rights movement.

We also went to the awesome Civil Rights museum, 16th St Baptist Church, where four young teens were killed when a bomb was thrown in the basement of the church where the girls were practicing for choir. In the park across the street is a memorial sculpture (right). 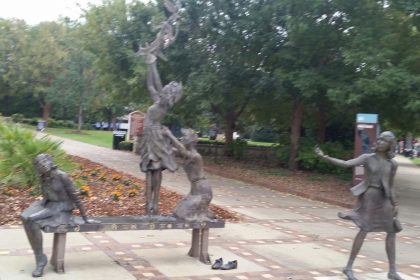 We ended our day with a warm welcome and delicious meal at the UU church in Birmingham, which played a string role in supporting the desegregation protests.

Monday we are going to Selma. The theme is sacrifice and remembrance. 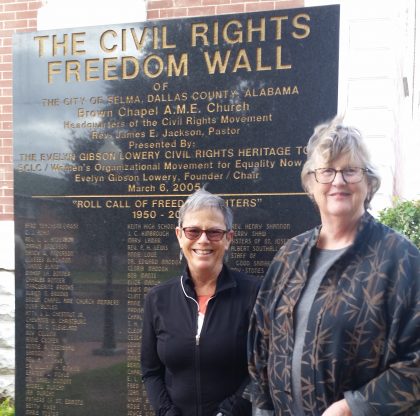 Betsy Leutz and Lucinda Duncan (left) in front of Brown Chapel, where marchers congregated when police forced the freedom fighters back from marching to Montgomery.

Jimmie Lee Jackson’s unfair shooting by the police prompted the March from Selma to Montgomery. We marched in silence across the Edmund Pettus Bridge. There was not a photo opportunity of us walking. We were in deep reflection. 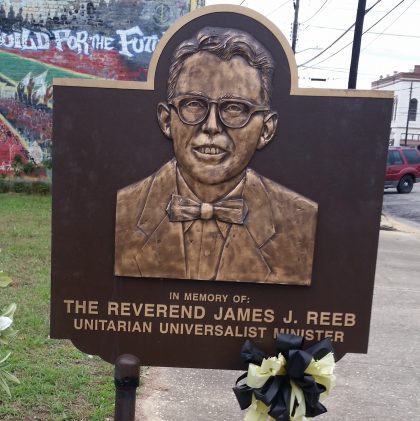 It was the killing of a white Unitarian minister, Rev. James Reeb (see right,) who went to the march that got the attention of President Johnson, as well as the media, that allowed the nation to see the brutality that was occurring.

The March took place after 3 tries. ML King applied and received a legal permit and Johnson ordered protection of the marchers. 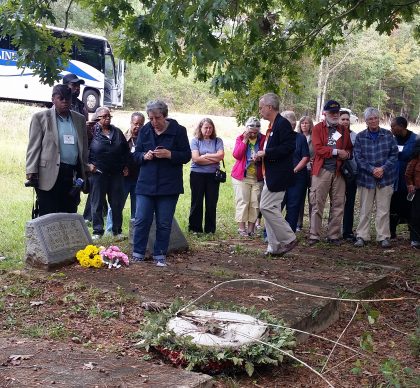 The theme for today is Restorative Justice and Reparations. We visited the grave of enslaved people (left) and the grave site of Jimmie Lee Jackson, who was shot to death for trying to protect his grandfather from police brutality. 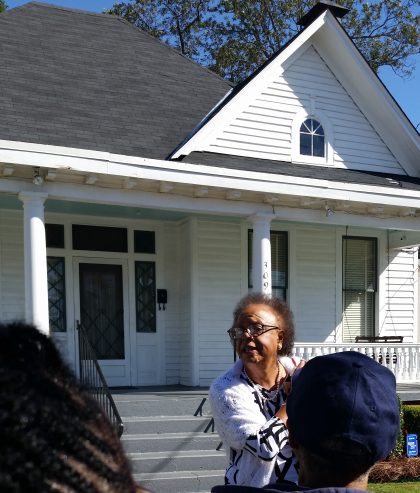 Here we are in Montgomery (right),  taking a tour of Martin Luther King’s parsonage, where he lived with his family when he was pastor of the Dexter Baptist church. The highlight was that the tour was led by Dr. Sheryl Cherry, who was a parishioner when Dr. King was pastor. As were the other first-hand accounters, she was full of wisdom, history and insight told with humor and passion.

We also visited the Equal Justice Institute, which was powerful beyond words and later walked in silence around the Maya Lin memorial.

Our theme is Anger, Forgiveness, and Accountability. We visited Tuskegee University, the Tuskegee Airmen air base, and had lunch at this school, which was built in 1903. We heard from graduates of the school.

Our lunch was prepared by the women in the community and brought in. It was delicious southern cooking. This school house was built for black children. Once again, hearing the personal stories of individuals was an awesome experience. 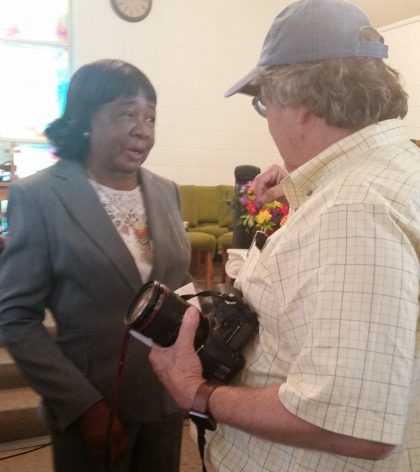 At left, Follenite Toby Shakton is talking with Ms. Cole, who spoke to us about the brutal 1964 beatings of her innocent parents and the burning of Zion Methodist Church by Klansmen who thought that civil rights worker Michael Schwerner was there discussing the creation of a Freedom School.

Michael and two other civil rights workers were later jailed, then set free at 10pm, when police plotted with Klansmen to follow them to a dark highway. The two white boys were shot dead while the black worker was tortured and buried alive. Their bodies were found six weeks later. 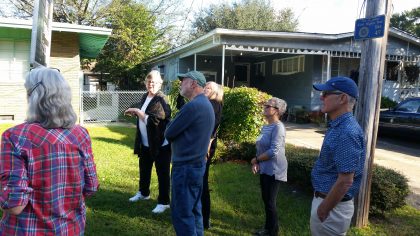 We are winding down our trip. We are meeting the most amazing people and hearing individual stories of their experiences or their parents’ experience during the Civil Rights era.
Here we are (at right) at the home of Medgar Evers, where the civil rights leader was assassinated in 1963. 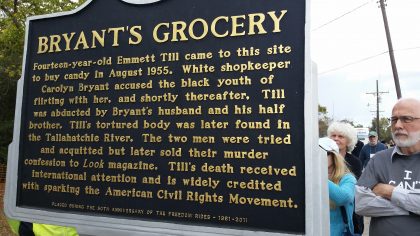 At left, we visit the site of the grocery store in Money, MS, where 15-year-old Emmett Till met a white woman who accused him of flirting. Till’s 1955 murder and funeral wer widely covered in media and brought international support for the fledging Civil Rights Movement.
Today our theme is Resilience and Call. We are on our way to Memphis.
Section Navigation