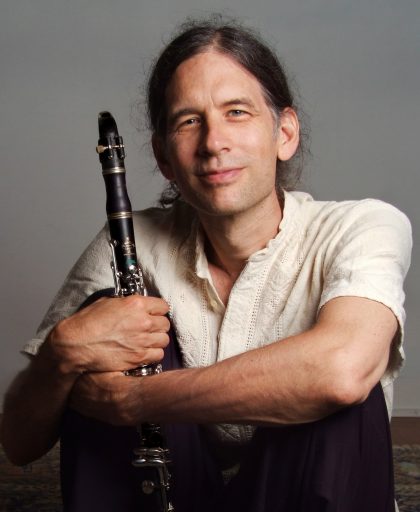 Glenn Dickson has taken the processing techniques of Robert Fripp and Brian Eno and applied them to the clarinet, creating an ethereal and haunting atmosphere built on the warm humanity of the clarinet sound.  His compositions and improvisations draw on a career of playing klezmer, classical, Greek, jazz and rock in different settings to create shimmering other-worldly harmonies and speech-like inflections in the melodies which are meditative and dreamy while compositional in depth & scope.

Glenn, as leader of Naftule’s Dream and Shirim Klezmer Orchestra, has toured North America and Europe, at venues as diverse as the Berlin Jazz Festival and the Philly Pops.  He has collaborated with Maurice Sendak (Pincus & the Pig) and his music has been used by Woody Allen in “Deconstructing Harry.”  He has won a Massachusetts Cultural Council Artist Grant for music composition.

The concert is part of the Follen Bridges Concert Series. Learn more about Glenn at his website, www.glenndicksonmusic.com.