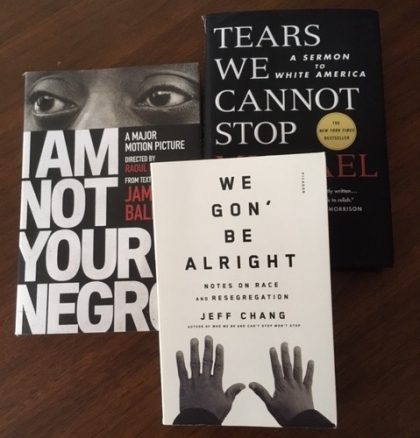 Follen’s Anti-Racism Book Group meets once a month on the third Sunday evening of the month during the church year. Their past reads (and occasional movie views) are below. All are encouraged to attend–even if you haven’t finished the book!  Email Jane Current at antiracismbookgroup@follen.org for more information. Meetings are currently on Zoom.

How to Be an Antiracist by Ibram X. Kendi
The Vanishing Half by Brit Bennett
Caste by Isabel Wilkerson
“Dark Girls” documentary by Chansin Berry and Bill Duke
Me and White Supremacy by Layla Saad
How The South Won the Civil War By Heather Cox Richardson
Fools Crow by James Welch
The Sum of Us by Heather McGhee
The Heartbeat of Wounded Knee by David Treuer
Sister Outsider by Audre Lorde

Tears We Cannot Stop Michael Eric Dyson
The Children David Halberstam
We Were Eight Years in Power: An American Tragedy by Ta-Nehisi Coates
Thurgood movie of play starring Laurence Fishburne
“Boston. Racism. Image. Reality.” Seven-part Boston Globe Spotlight series
Why Are All The Black Kids Sitting Together In The Cafeteria? by Beverly Daniel Tatum
Salvage the Bones by Jesmyn Ward
Slavery By Another Name by Douglas Blackmon
Black Walden by Elise Lemire
Autobiography of Frederick Douglass

Common Ground by J. Anthony Lucas
The Underground Railroad by Colson Whitehead
13th documentary by Ava Du Vernay
Evicted by Matthew Desmond
Moonlight movie by Barry Jenkins and Tarell McRaney
Waking Up White by Debby Irving
Anything written by James Baldwin PLUS documentary film, I Am Not Your Negro
Stamped from the Beginning by Ibram X. Kendi
Darkening the Doorways: Black Trailblazers and Missed Opportunities in Unitarian Universalism by Rev. Mark Morrison-Reed

Between the World and Me by Ta-Nehisi Coates
The Warmth of Other Suns by Isabel Wilkerson
Just Mercy by Bryan Stevenson
The New Jim Crow by Michelle Alexander ( also TED talk by author )
Traces of the Trade: A Story from the Deep North documentary by Katrina Browne
The Autobiography of Malcolm X by Alex Haley
America’s Original Sin: Racism, White Privilege, and the Bridge to a New America by Jim Wallis
Fixing the System HBO Documentary about incarceration