This is a special blog post about the just-concluded Follen youth service learning trip to New Orleans, LA.

During Follen’s week in New Orleans I kept reminding myself that there were learnings everywhere.  There were things that were obvious: the multicultural community in which everyone lives, the different pace of life, the differences between being in the city and outside in the suburbs or in the country.  But that is only part of the difference. Take the work that our group did in the communities near the Westbank of greater New Orleans. We arrived at the home of a family that had contacted Youth Rebuilding New Orleans (YRNO), requesting help in gutting the family’s dilapidated and structurally unsound home to make improvements.  It had been the home of a now-deceased pastor; his wife suffered from dementia but had given the go-ahead to her children to make improvements. What no one knew was that a nephew – probably suffering from mental illness – was living in the house.

Our crew arrived ready to begin work only to find that the nephew would not allow entry to the space.  The two daughters of the pastor, soon joined by a cousin, tried to gain entry but it was not to be: if the house was gutted the nephew would have nowhere to live.  A great deal of shouting ensued as the sisters tried to negotiate with their nephew. After a while, a compromise emerged: our group would clean up the property on the outside and the inside would be tackled later. 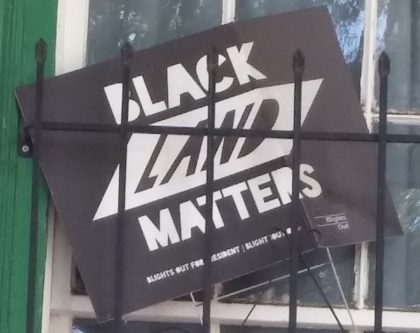 As we walked to the back yard, the challenge emerged: trash had been building up, probably for years: empty bottles and cans, clapboards that had fallen off the house, an old animal cage, pieces of iron, and much more.  A hill of dirt made passage to the back yard challenging, so some members of our team set to digging out the hill to try and level it, and others started hauling trash to the street. Clapboards were brought out so that nails could be removed or pounded down.  After 90 minutes, a very large pile of trash was stacked in front of the house to await hauling.

I was invited inside the house along with YRNO’s construction manager, John, to survey the inside. Termites had been attacking the support pillars for the house and the floor – and spongy spots were everywhere.  The ceiling looked like it might fall down. And more. From the outside, the realities of renovation were invisible but now, even while recognizing that gaining entry to the house might require negotiation and careful treading of family dynamics, much more was apparent.

Two days later we found ourselves at a home in the Treme making a Rain Garden.  The consultants from WaterWise New Orleans explained that with the amount of rain received in New Orleans and the fact that the city is below sea level, serious risks exist for flooding.  The city’s pump stations can handle 1” of rain an hour. When the amount of rain increases – as it frequently does – the storm sewers and pumps can’t handle the water. Add to that the fact that many of the storm drains are blocked by an accumulation of Live Oak leaves and Mardi Gras beads, and that the ground is clay-like and compacted…and you begin to see the challenge.

So YRNO and WaterWise have partnered to build rain gardens: plots of land that are dug out, to a depth of 8-10 inches, carefully preserving the deep roots of the trees that fill many sidewalks in the city. When the clay-like soil is removed, sandy soil that drains well is replaced…and holes are poked in it to help it settle in around the tree roots. Indigenous water-loving plants are brought in, and rain barrels installed near downspouts to catch water.  The water can be carefully released to feed the rain gardens; the storm drains are cleaned out and composted leaves are hauled away – allowing for much better drainage and less risk of flooding.

What lies beneath the surface – like the roots of old trees – is unseen until it’s excavated and re-planted.  This kind of work – like the work at the house near the West Bank and like much of the work that continues in New Orleans – is not always apparent to the eye.  But all of it is valuable to the still-struggling City of Jazz that is like no other in the world. This has been the work of this year’s youth service learning trip, to discover both that seen and unseen, and to learn from the discoveries.