from Director of Music Vivian Montgomery

Some of you know that my performing, recording, teaching, and scholarly ventures have been immersed this year in celebrating the 400th birthday of Barbara Strozzi, one of the truly great composers of the Italian baroque. I wanted to give you a little info about all that I’ve been doing, and will continue to do through 2019.

Last spring, I taught a course at the Longy School of Music (where I’m on the Historical Performance faculty) that encompassed a multi-pronged process for discovering the work and life of 17th century Venetian rebel composer/singer Barbara Strozzi (1619-1677). Her compositions challenged the male-dominated status quo of morality, performance style, and musical language. Her arie range from heart-on-sleeve laments to raging and sexually-charged cantatas to intimately devotional sacred works, encompassing the full array of voices, keyboard, plucked, and string instruments, and providing an enlivening foundation for improvisation among all instrumentalists and singers. We worked together to develop a dramatic and varied collage of her works alongside recitation and visual representation about her life, her mind, her voice, and her challenges. In addition to a final multi-media and dramatic performance at Longy (entitled “You Didn’t Come To Hear Me Cry”), the course culminated in a presentation on Strozzi as part of a series of events at the Brandeis University Women’s Studies Research Center, where I’ve been a Resident Scholar for 12 years. Dr. Janet Youngdahl, soprano and co-founder of my ensemble Cecilia’s Circle, joined the course for final preparation and presentation of its project. 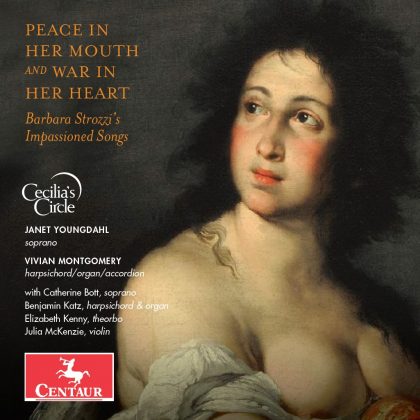 Over the summer, Cecilia’s Circle’s long-awaited CD of Strozzi’s music, Peace in Her Mouth and War in Her Heart: Barbara Strozzi’s Impassioned Songs, was finally released by Centaur Records. As of this Friday, it’ll be fully issued digitally on Amazon, Spotify, Apple Music and other platforms. Stay tuned for a CD release event at Longy in early November!

In early September, I was joined by Janet and our fabulous lutenist colleague Elizabeth Kenny at the International Women’s Work In Music Conference at Bangor University in Wales. We gave a lecture-performance by this description: “a celebration of the work and life of 17th century composer/singer Barbara Strozzi…raised as the adopted daughter of the poet and intellectual Giulio Strozzi who founded the Accademia degli Unisoni, an intimate hotbed of Venetian philosophy and arts. Barbara had educative contact with numerous composers and poets, and she first came to light as a professional composer by providing music for the Unisoni meetings. Strozzi was peripatetic in her quest for patronage, dedicating each volume to a different prominent figure, and she never married. As we revel in her gifts, we encounter questions (some tired, some pressing) about her standing and image in Venetian culture, and the associated obstacles she faced. But such questions have become meaningful in an entirely different way of late, especially in the past two years, having witnessed the public reckoning with women’s working and living conditions throughout history. We begin here by recognizing that, regardless of her obvious strength (“fire”) and self-determination (“persistence”), Strozzi’s movements were frequently dictated by the men surrounding her. Her creativity challenged the rigid status quo of morality, performance style, and musical language in the Italian accademia. Her arie range from heart-on-sleeve laments to provocative cantatas to intimately devotional works. This presentation features live performance…illuminated by dramatic recitation of texts about Strozzi’s life, her musical mind, and her voice.”

Coming up on Friday November 1 is an installation event as part of the American Musicological Society Annual Meeting in Boston, where Janet and I will be joined by Follen’s own Molly McGuire. Hidden Portraits Within the Gates of Venice: A Multi-Media Event Surrounding Three 17th– Century Women is described here: “Can the music of Barbara Strozzi (1619-1677) be better understood by widening the lens to include her Venetian contemporaries, Jewish writer Sara Copia Sullam (1592-1641) and painter Chiara Varotari (1584-1663)? The lives of 17th-Century Venetian women artists were circumscribed by a climate of incessant literary debate over the inherent worth of women. Lynn Lara Westwater convincingly describes the narrowed artistic environment faced by woman writers and notes the daunting task faced by female artists in a hostile environment. This presentation explores the interconnecting work of each woman artist on its own merits, without the trappings of the male gaze and the hobbling effect of a world intent on viewing women’s contributions as eternally displayed by her décolletage. How do the lives and work of each of these artists, seemingly unknown to one another yet steeped in comparable restriction, inform us of the others? This “crossover” session…will feature live performance by soprano Janet Youngdahl and harpsichordist Vivian Montgomery, surrounded by projected images of Varotari’s paintings, readings of Copia’s writings, and recited texts about Strozzi’s life, mind, and voice.  Further dimension will come from the screening of a short film, by Brown University experimental film instructor Jennifer Montgomery, enacting Strozzi’s sorrowful L’amante Segreto. As we lift up Strozzi’s unique voice in the presence of Copia’s writings and Varotari’s images…the artistic media of these three contemporaries will be brought together by observing these women’s shared and differing responses to criticism in the skillful polemic of their own art forms: Strozzi crafting biting musical dialogs, Copia disguising caustic barbs in the cloak of polite religious defence, Varotari dutifully painting the children of the elite while releasing a raging self-portrait. Considering the constraints, the output of each woman, encountered here in an interdisciplinary and multi-media collage, allows us to view their works as significant triumphs, with the creators fully visible and realized despite surrounding efforts to limit and conceal them.”

And November 8 & 9, Janet and I will be teaching a weekend-long course at Boston University entitled Barbara Strozzi at 400: Sacred Works From A Soul Ablaze, which will explore the unsurpassed creative voice found in Sacri Musicali Affetti, Opus 5. Strozzi’s sacred pieces, entirely for solo voice, are intimately devotional works, encompassing the full spectrum of innovation and drama found in her secular works. The desired outcome is that each student will have dug deeply into one of the motets found in this volume, while working collectively to consider Strozzi’s sui generis relationship to the realm of sacred vocal music in her day.

And a note about my sister’s film, to be shown for the first time as part of our AMS event: it’s a short piece that was shot in August 2018 featuring Follen’s entire Walters family, with Grace playing the part of the young Strozzi. The vignette’s concept is simple: Strozzi’s father introduces the young (teen) Strozzi to a gathering of the Accademia degli Incogniti, a gathering of contemporary [male] intellectuals and artists of the time who were her main audience.