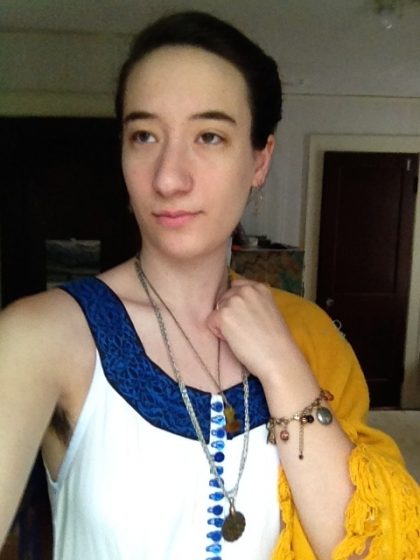 A Personal Point delivered at Follen on April 9, 2017. See video below.

Hi, my name is Nancy McCarthy, and I was in college when Ferguson happened. It would have been junior year, when I was abroad. Like many among us, I grew up in my good ol’ New England world, where racism happens inside people, implicit biases that society taught us, that we just need to overcome! Of course there’s further to go, but things are pretty ok!

Turns out, not so much. I was studying abroad in Germany, watching the German news coverage of Ferguson protests. Over there it was world news, like the way we hear about protests against Putin or something. I remember one girl turned to me in the common room and asked, “So, can you explain to me the race relations in America?”

At that point I was like, I don’t think I can even explain it in English, let alone in German. I knew it was a problem, and a deep one, but it was just something I could sense – I couldn’t articulate any of the details.

The last two years of college I basically learned what I know about race in America. There was no great moment of realization, just the steady drip-drip of articles on Facebook. Young black activists on the internet articulating the truths that I, as a white fish swimming in privilege water, couldn’t see until they were pointed out. And it was pretty easy to learn. Every day, headlines jumped out of my news feed: “White People Perpetuate Racism,” “Mistakes white allies make,” “Why that feeling of outrage you have at being lumped in with ‘all white people’ is a distraction from the real issues.” These activists shared their emotions, and their truth, and I believe them. It was a simple matter for me to become invested in these issues. People are hurting – and I could be contributing to it! It’s a sharp and heavy feeling.

After I graduated, I came back to Follen. I know lots of people my age forgo church, but I was looking for a little faith, and my concern over racism definitely played a role. Partly it’s that at church I can hear sermons that made me hopeful, that talk about how the world is not inherently a disaster. And partly, its that Unitarian Universalism has that fabulous activist reputation. I remember people talking about it when I was a kid here, although it didn’t interest me then. (My Follen childhood was basically just choir.) When my parents and I drove back and forth to Smith, where I went to college, we passed the UU churches in each town center, and each one had its “BlackLivesMatter“ banner. It seemed clear to me that Unitarian Universalism had the same concerns I had about racism in America.

I was a bit confused when I came back to Follen and found no banner, and no report of any discussion about it. But I know my church. There are so many social justice causes to grapple with, it seemed perfectly logical that Follen just hadn’t got to this one yet. I was sure that, once someone brought it up, everyone would be like “Oh of course, how could we forget.” After all, I reasoned, Follen is full of grown-ups, who are activists, who have been doing it for much longer than me. Some of them remember the Civil Rights movement! They must be miles ahead of me on their anti-racism journeys of self-discovery!

Which is why I was startled and dismayed that “We should put up a BlackLivesMatter banner at Follen to show solidarity with black people in the struggle against racism” wasn’t answered with “Oh, of course, lets do it,” but rather “Ooo, we need to have some lengthy discussions about that.”

I was stunned to discover that, among Follen’s anti-racism activists, I am apparently radical. I was sure that activists 2 or 3 times my age would far surpass my tolerance for discomfort and confrontation. After all, I just read articles on the internet! Follen’s grown-ups have done real-world events and trainings. They have credentials and experience. But it seems like the language used by young activists of color presents a learning curve even for those people who remember the 1960s Civil Rights movement.

I do still think that a BlackLivesMatter banner is a no-brainer for people who’ve reached a certain point in their education about American racism – and I have faith that my church can get there.  I’m just continually disappointed that we’re not there yet.