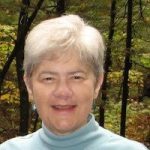 Our worship theme for June is “Pilgrimage.” Member Carolyn Kingston (left) shares a trip to France to explore her family’s history.

June 18, 2017. Ninety-nine years ago today my grandfather, Major Edward B. Cole, U.S.M.C. finally succumbed to wounds he received at the Battle of Belleau Wood, a key battle of World War I. As commanding officer of the 6th Machine Gun Battalion, he led his troops against a German machine gun nest buried deep in the woods. He was in the process of throwing back a grenade when it exploded in his hand. He is buried at the Aisne-Marne American Cemetery, in Belleau, France.

Last September my sister, Diana Cole, and I took the pilgrimage of a lifetime to France to visit many of the places where Major Cole served in the spring of 1918. It is amazing to me what still remains of the “war to end all wars:” dugouts grown over with vines, shell casings and grenades, a tumbled down farmhouse where the officers slept and made their plans, and the exact spot where he fell, determined by an old map, notes from the reconnaissance officer at the time, and modern GPS technology!

Of course we could never have done this on our own. The trip took nearly three years to evolve, and it is thanks to my meeting Madeleine Johnson through the Internet that it happened at all. She is a writer and World War I military historian, and the grandniece of Lt. Lothar Long U.S.M.C., who served under my grandfather and wrote about him in his letters home. She put me in touch with Gilles Lagin who grew up near Belleau Wood, where since childhood he has collected many artifacts from the war. He was made an honorary Marine in 2006 for his dedication to the Americans who fought in the war and his service in taking American families and servicemen on pilgrimages around Belleau Wood. His knowledge and diligence in researching Major Cole’s time in France provided Diana and me with a unique pilgrimage experience.

I think it is my recent years of absorption in learning about my grandfather’s life that made this journey feel like a pilgrimage to me. Spiritual pilgrimages are the apex of faith, whether Christian, Jewish, Muslum, or Hindu – something to experience once in a lifetime. Growing up I heard very little about Major Cole from my father, who was only 10 when he died. There were no pictures of him around the house, just a small brass model of the propeller from the destroyer named after him, the U.S. Cole, (the first U.S. warship named for a participant in WWI) sitting on the sideboard of our dining room in Lexington. He came alive for me when my mother, Mary S. Cole, wrote the story of his life through the letters he wrote from France in 1918. A Bridge of Remembrance, which she dedicated to the memory of my father, Charles H. Cole, is the portrait of a loving father and husband who was a dedicated officer to his men and to the cause.

“What a strange world it is: millions of people suffering on account of one ambitious man and his imbecile son . . . but we must take up the burden and cheerfully for it means a better world if we are steadfast and true to our trust. We are working and suffering for the noble cause of humanity.”  — Major Edward Ball Cole USMC

The heroism of my grandfather, so clearly shown in my mother’s book, is what attracted a French filming team to his story. After much planning it was arranged that we would spend three days tracing his steps through the countryside of France with Gilles Lagin as our guide. Three long days with cameras, body microphones, and even the occasional drone above was a novel and deeply moving experience.

Our tour will be one part of a documentary to be released for the centennial in the spring of 2018.

A poem I wrote after returning home

In Memory of My Grandfather, Major Edward Ball Cole

The wounds of war are nearly gone.

New growth trees replace the charred remains of their ancestors,

Only Gilles, our guide, can show us the faint shadows cast by a hundred years:

The hollow of a shell impact,

A foxhole where a Marine huddled with his rifle,

A dugout, dug deep, to escape the whine of an approaching shell.

Roots and moss now drape the mouths of the earth’s screams,

Muffling the din of ancient battle.

In the silence it is hard to imagine that on this ground,

And as many more now lie in the cemetery at Belleau,

My grandfather among them.

Perhaps we are not welcome here.

We walk slowly down into the narrow ravine where he fell.

Why did he pick up a live grenade?

To protect his men in foxholes below the German nest, the story goes.

Standing in silence on this spot,

I realize that somewhere, deep in the soil beneath,

His blood, my blood, soaks the earth.