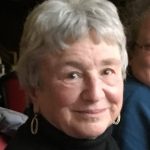 The spiritual exercise for June is “Pilgrimage” and Rev. Claire has given us a list of eight local sites that connect us to our UU history.  I was delighted to see that I have visited seven of those sites, some more than once, and only the Margaret Fuller House in Cambridge remains.

Of even greater importance, is the pilgrimage that four of us – Rev. Susanne Intriligator, Sarah Richards, Megan Lancaster and I – took to Transylvania, the place where our Unitarian tradition began nearly 450 years ago.

Arrival in Our Partner Village

We arrived in Cluj, Romania on Good Friday and stayed in our partner church village of Alsofelsoszentmihaly through Easter Monday.

Each of us was hosted by a couple who had visited Follen in 2014.  Most of the older folk do not speak English. However, their children are required to learn English.  Junior high and high school students travel to or board at the Hungarian schools in Turda or Kolosvar during the week but come home on the weekends. So there were enough young English speakers on hand during the four day Easter weekend in addition to two young adults who did most of the translating for us.

You can get a wonderful full description of our day-by-day doings on Susanne’s travel blog.

Tuesday through Friday we were on the road in a comfortable minibus visiting historic sites pertinent to our Unitarian history.  We were accompanied by four church women, pensioners who left their husbands on their own for four days to travel with us. They, too, had never been to the UU sites.  Our travels were led by John Dale and his wife Csilla, guides provided by the UU Partner Church Council Travel Service.  Rather than repeat everything twice, John guided us in English and Csilla spoke to our guests in Hungarian.

In the Church’s Community Center

On the six days we spent in the village we had many meals in the community center prepared by many loving hands.  The staples during the winter months are pork or chicken, potatoes and “salad” (cabbage, radishes, and pickles).  During the summer, there is a large variety of vegetables.

By the way, the community center was refurbished and a second story was added a few years ago with funds raised by Follenites and the sweat equity of the church members. Our funds also assisted in building the much-needed second story on the parsonage for the minister’s family of 3 generations.

On our last evening in the village as we ate traditional Hungarian goulash, we were asked to share the things we would most remember.  Here are my thoughts.

First and foremost was the warm hospitality, thoughtfulness, and care we experienced throughout the visit.  More about this later.

Second was the home stay with a village family.  My host family had visited Follen in 2014 and learned that many American families eat cold cereal for breakfast, so there was Muesli and yogurt for me each morning. On alternate days we had eggs, from their own chickens, which were served scrambled. I also partook of their typical breakfast of cold cuts, cheese, and bread each morning.

The two sons, ages 30 and 23, moved out of their bedroom to sleep in a guest room outside the house for the week so I could use their bedroom with easy access to the bathroom in the main part of the house. I couldn’t ask for more wonderful hosts.

Third was the opportunity to meet the students we sponsor.  My student, Ildiko Kis, is studying music.  She sings and plays flute, piano and organ.  Indeed, she played one of the organ selections during the Easter service. To show their appreciation of her musicianship, the congregation wrapped their knuckles on the pew in front of them rather than applaud and disrupt the service. This practice is one we could emulate.  My student is also very active in a Hungarian folk group.  At one of the dinners, she and a young man sang and danced for us (see video).

We were so fortunate that Susanne, our Director of Community Engagement and a crackerjack communicator, was with us.  During a meeting with the sponsored students, she took each one to a quiet place outside to videotape a message from them to their sponsors. We also took the opportunity to get the email and Facebook addresses of each student so that sponsors could communicate more easily than in the past.  Upon my return home I had my grandchildren teach me how to access Facebook.

Fourth, was the opportunity to develop a friendship with the four women from the partner church who traveled with us.  During our road trip, the best moments for me were at mealtimes when we asked questions of one another with Csilla translating the questions and/or answers.  Three of the women have children and grandchildren. All of the women had worked and now had small pensions that were not enough to sustain them.  Melinda and her husband run a B&B across the street from their house; Illy, Eva and Kati work with their husbands in large home gardens to grow vegetables which they take to farmer’s markets.

Fifth, were the visits to the many sites related to the history of the Unitarian Church. Foremost in my mind was the site where the Edict of Torda was presented to the population by King John Sigismund in1568. This act of religious tolerance and freedom of conscience was so forward-thinking that it reminds me of how many UUs have been in the forefront of new ideas and change in our country.

His majesty, our Lord, in what manner he – together with his realm – legislated in the matter of religion at the previous Diets, in the same matter now, in this Diet, reaffirms that in every place the preachers shall preach and explain the Gospel each according to his understanding of it, and if the congregation like it, well.  If not, no one shall compel them for their souls would not be satisfied, but they shall be permitted to keep a preacher whose teaching they approve. Therefore none of the superintendents or others shall abuse the preachers, no one shall be reviled for his religion by anyone, according to the previous statutes, and it is not permitted that anyone should threaten anyone else by imprisonment or by removal from his post for his teaching.  For faith is the gift of God and this comes from hearing, which hearings is by the word of God.

These words still ring true today and form the basis for our Unitarian traditions in Transylvania and here at home. However, I was also struck with the differences between the two churches. The Transylvanian Unitarian church is definitely a Christian church and one which is deeply rooted in a conservative tradition.  For instance, men and women sit separately (it reminds me of an Orthodox Jewish synagogue) and everyone rises when the minister enters the sanctuary before the Sunday service. The congregation also expects the minister to run church business though he collaborates with the laity.

On the other hand, we Americans have evolved from a basically Christian church to one in which many traditions are accepted and celebrated. We choose to run our programs in a democratic way often seeking consensus on issues. I remember several visitors in 2014 telling me how “free” we seemed to them.

Nonetheless, I was greatly impressed with the supportive community both churches provide to their members. And it was their community that extended a warm welcome and incredible hospitality to us.  This, by far, is what I will  most remember.