Home » Follen Blog » In the Interim: Adventures in the Big Easy

Note:  Deb Weiner’s series of reflections on the tasks of interim religious leaders and the congregations they serve will continue next week.

We landed at Louis Armstrong Airport on Saturday in the middle of a huge storm – tornado warnings in the area, torrential rain, a real soaker.  But all was well as Follen’s service learning trip participants and chaperones gathered up our belongings.  We headed to our vans and moved into the Youth Rebuilding New Orleans Bunkhouse on Hope Street in the Seventh Ward, close to the Treme, the oldest Black neighborhood in New Orleans.  With our gear installed in our bunk rooms, a few of us grocery shopped, cooked, and later in the evening we had an orientation to our week and prepared for adventure.

On Sunday we worshipped with the congregation of the First Unitarian Universalist Church of New Orleans in a service, led by the Rev. Paul Beedle, which focused on friendship. We ate lunch at the iconic “Dat Dog” on Freret Street and then took off for the Whitney Plantation, located about 45 minutes outside the city.  Our reflection circle on Sunday night focused on historic racism, the legacy of slavery, and why it is a privilege for us to be volunteering in New Orleans. 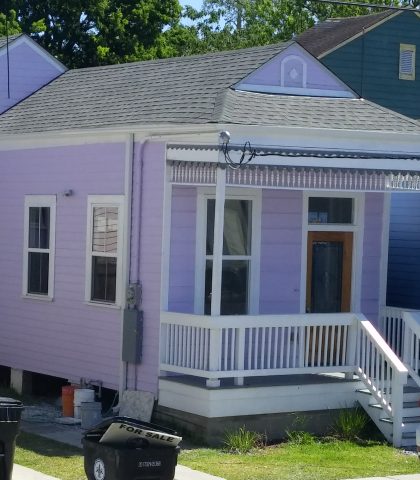 On Monday we met the leader of Youth Rebuilding New Orleans, Prince Holmes, who has worked with YRNO for seven years and for the last two years – at age 24 – has served as Executive Director, along with his colleagues Maggie, John, and Earl. Our work was on St. Ann Street, at a house across the street from one that Follen volunteers worked on several years ago (see photo, left).  This house, now completely restored, has been sold (the closing’s on Thursday).  YRNO is working on a number of other houses on the same street, and painting, window glazing, and other finishing work is now being done by our group.

On Tuesday we moved to Metairie to work on the grounds and gardens of an elderly homeowner who had contacted YRNO for assistance.  Her house, built on pillars and a slab, had shifted with the torrential rains over several years, and sand had been blown around the house to re-stabilize the footings.  Her gardens had fallen into disrepair and, struggling with a heart condition that made her unable to garden, she needed help (see photo at right).  John, the YRNO foreman said, “We don’t like to say no to people.”  We split into teams and worked all around the house, breaking for pizza that the owner had provided to us.  We declared ‘victory’ on the work at 2pm and posed for a photo (top) with Miss Gigi (seated) and her granddaughter, Rachel, and headed back to the bunkhouse by way of the Lower Ninth Ward.

In the Lower Ninth – the worst-devastated part of the city during the Katrina storm and breach of the levees – we stood near the top of the levee and looked out over the devastation.  We saw the houses erected by the “Make it Right” foundation (started by actor Brad Pitt) – all of the houses unique in architectural design but carrying solar panels, LEAD certification, and having escape hatches through their roofs.  We read the plaques that mark the spot of the ‘federal flood’ and thought about how 3400 residents used to reside in the area, now reduced to a few hundred, with no grocery store or other conveniences nearby.

Sobered, we returned to the Bunkhouse, enjoyed another of Chef Caroline Walters’ terrific meals (this night it was a snack of Gulf Shrimp, guacamole and chips, and a supper of red beans and rice) and then headed toward the French Quarter to experience the unique and sometimes, outrageous peculiarities of Bourbon Street. We ended the evening at Café du Monde, another New Orleans icon, for beignets (one of our youth ate five!), hot chocolate and café au lait.

Today we’re back at St. Ann Street (see left) and will be moving to another location this afternoon.  The work will end at 3pm, and there will be just enough time for a quick shower and a trip to the downtown area for Wednesdays at the Square, a free outdoor jazz concert with supper purchased from food trucks.

A mix of service, learning, and a dip into the rich culture that makes New Orleans one of the most remarkable cities in the world…that’s all on our agenda this week.  Our group sends its love and best wishes to all Follenites as our mission continues prior to our return home on Saturday.