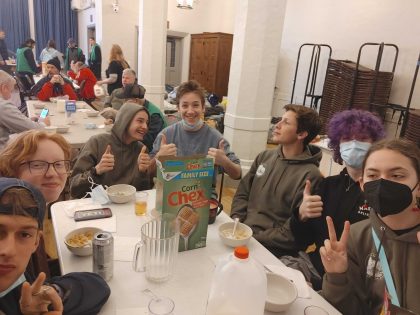 On the weekend of April 29th-30th, 7 youth members of the Follen UU Youth (FUUY) Group, along with their Youth Program Coordinators and Advisors, participated in the CityReach program, sponsored by Ecclesia Ministries – Common Cathedral. This was the first time FUUY had been able to participate in the program since the weekend had been canceled 2 years ago due to the pandemic. The program operated a little differently than it had in the past to help mitigate any exposure to Covid, but the ministry for the most part stayed the same.

We spent the first night meeting with the other groups over zoom and hearing some of the stories of unhoused individuals on the CityReach staff. Afterwards made lunches to give out the next day and wrestled with some of the difficult questions presented to us by the CityReach staff. As we discussed the questions we began to work through just how difficult it is to do some of the most basic self care tasks without a home or space to live. Often there wasn’t one definitive answer to any of the problems of homelesness. As one of the participants said “you often don’t realize it’s an issue until you’re living it”. As a group we came to two conclusions: First, without a sense of

home there is very little to no sense of security and this in turn makes doing the most basic of tasks a challenge, showering, sleeping, going to work, even just trying to relax becomes next to impossible. Second, often what leads people down the path of homelessness is a lack of any support group. As we discussed these issues many of us in the group agreed that if tragedy were to strike us, we had some form of support to fall back on, family, friends who would help us until we got better. Once we had finished our discussion we shared some of what we had talked about with the other groups over zoom and in turn got an insight into their discussions as well. 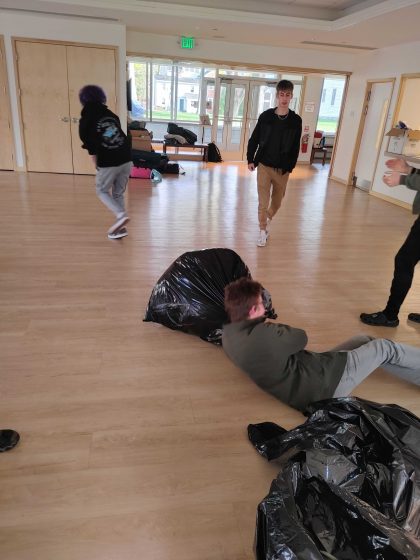 The next morning we got up early to drive into Boston to the Old South Church, across from the Boston Public Library, where we met up in person with the other groups. We ate breakfast and went over the schedule for the day. We were told how to organize the donations and each group was given a station to work. Ours was pants and underwear. We then opened the doors to our guests and headed out for donations and lunches for the next 3 hours.

We were then given a tour of the city by some of the staff who were currently or had previously been unhoused. We got to see where they slept, found shelter, and some of their favorite spots in the city. Once we came back together we debriefed as a group, packed everything up and headed how. Overall the weekend was a wonderful experience where the focus was not only in trying to give back to those in need but also to help us form relationships and destigmatize homelesness. At the end of the program we were all asked to remember someone we met over the weekend and to keep their story in our minds as we went back to our lives at home.